And not, as was rumored on social media, from statements attributed to unions (whatever they are). It has neither the right nor the responsibility to determine the colleges’ outputs of medical cadres.  As we have seen, all the outputs of the college departments were appointed for the previous year (graduates of the year 2020-2021), and that the Ministry of Higher Education and Scientific Research is the one who determines its outputs who are appointed in the Ministry of Health, and not determined by the unions, and officials in the Ministry of Higher Education and Scientific Research have clarified what has been done Circulating it from the unions’ data is invalid and does not harm the future of our students. We would also like to point out that the college provides teaching cadres, laboratories and clinics that many government institutions are unable to provide, and it is moving forward in order to provide the community with cadres with high medical skills, as is the case in most developed countries, which depend on the private sector in this, which is attested to by its outputs that made a life Dignified to mankind, as the world’s greatest doctors, specialists and engineers who made life and ensured health for mankind had graduated from the private sector. 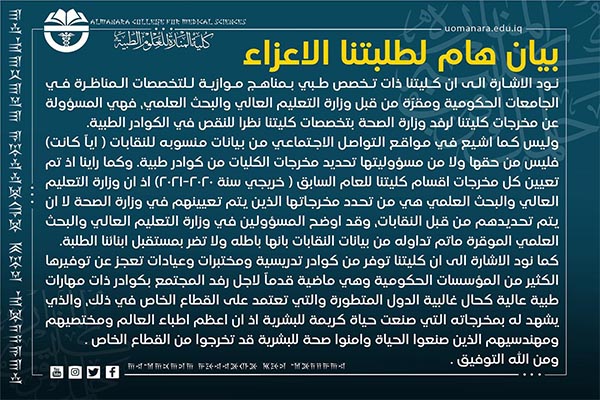